In 2008 Bertony Faustin became the 1st recorded black winemaker in Oregon. The journey that lead him to this incredible accomplishment was not typical nor could it have been. In and industry of legacy and privilege Bertony had neither, he was not the decedent of prominent wine lineage and his motivation was never strictly about the wine. His destiny was sown deeply into the fabric of family and living up to the expectations of his father. With so many entering the industry  to become a renowned wine maker Bertony had bigger plans. He saw his opportunity to build a platform that would allow him to change the world. "I don't just love the industry, what I love most is where the industry allows me to go." Building the foundation to bring people together, break bread and develop community. His efforts allow for a deeper conversation into diversity, equity & inclusion.

"This is my hustle" 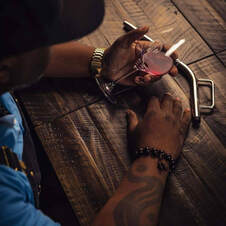 Photo By Danhawkphotography.com
Bertony Faustin will always make a way. Philosopher, thought provoker and change maker his spirit is one that will endure all obstacles and setbacks all while inspiring others to do the same. Born from Haitian-immigrant parents, this Brooklyn born New Yorker's destiny was never set in stone. More similar to the water that flows through the river rock that is adorned on his wine label; Bertony can quickly adjust course when obstacles impede his progress.  Proudly proclaiming his abstinence from alcohol when he started Abbey Creek Vineyards in 2008 his course would not be like the rest. His work ethic and drive led him to claim his foothold in the Oregon wine industry and he continues push it forward to the next frontier.

Bertony's continual refinement "My best is my next" attitude has been the keystone of the vineyards success. He plants the vines, tends to them, harvests the fruit, makes the wine and sells every bottle. This self taught, hands on approach allows Bertony to be involved in the winemaking process from soil to glass. "I'm a farmer first", never skipping a step he is a student of nature. Long days in the vineyards lead to breakthroughs in his business and the growth of his movement. 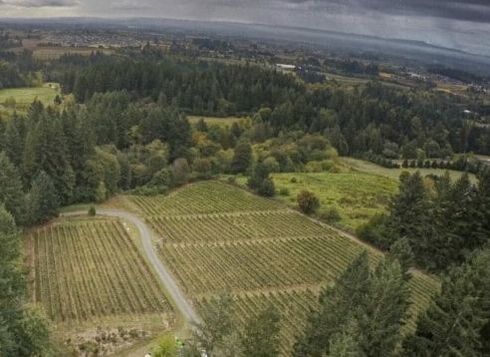 Abbey Creek, named after the creek that runs through the vineyard property, lives in the west hills of Portland Oregon. The first vines were planted in 1981 by Dr. Robert & Sandra Simmons on a modest 5 acres of the 50 acre property. Originally planted as a tax deferral establishing the property as farm land; These grapes would lay the foundation for boundless growth and potential.  Unbeknownst to the original cultivators of this land one ingredient was missing.

It needed a pioneer and Bertony Faustin was just that! With the vision of growing a few rows of grapes to a brand that could potentially influence the world Bertony took on the challenge of building a label that would change the course of the industry. The tragedy of loosing his father evoked a change in career for our winemaker and founder Bertony Faustin. Planting 7 additional acres of grapes and establishing Abbey Creeks first wine label in 2008. 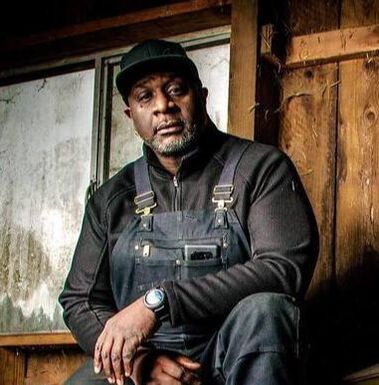 "That's how detached I was from the industry". A lot of people will ask, "Did you make wine because you love it?" "No", if wine didn't work it would have been raisins. Bertony Faustin was ready for a change, the tragedy of his fathers death was the catalyst that spurred this anesthesia tech to build something for himself. He felt he was living too comfortably, not up to the standard of his father Bertony Faustin Sr., a Haitian immigrant, who moved his family up to Brooklyn New York.

​Not speaking the language, not knowing the culture Bertony Sr. had to succeed because of, not in spite of the challenges he would face. White people called them boat people, Black people would call them uncle tom, even the fellow Haitians said he was giving back. An endurance was built and character was tested, these are the unmistakable traits passed down from father to son. It was never about the wine, it was about building new opportunities.

"They can't tell my story " 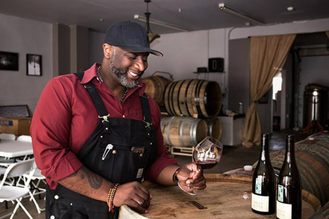 Establishing himself as a renowned and recognized winemaker in Oregon pinot country  Bertony had more challenges than your average vineyard owner. Systemic issues woven deeply into the history of not only the state but the wine industry as a whole proved to be fertile ground for Bertony (the first black vineyard owner and winemaker in Oregon) to establish his place as a true Oregon pioneer. Never one to let a challenge stop him Bertony took this as an opportunity to not only tell his story but the story of others who are facing similar challenges in the industry by producing the documentary "Red, White & Black". Documenting Jesus Guillen, Remy Drabkin, Andre Mack, and Jared Sleet's stories to give an inside look into the diversity challenge facing the wine industry world wide.

"This is my terrior" 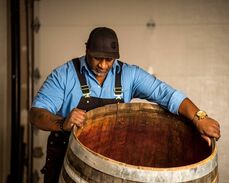 Photo By danhawkphotography.com
The North Plains and downtown Portland tasting rooms are anything but your typical tasting room. Hip hop bumpin', wine production happening on site (North Plains), all while maintaining a relaxed vibe. "I wanted to build this space as if I was the only one who would ever see it. I built it for me."

​Bertony remains steadfast in his ultimate vision of creating a community space not based on wine but community. A place where everyone may not know your name but they are happy to come up and ask. "This is my terrior", the foundation for all that we do.